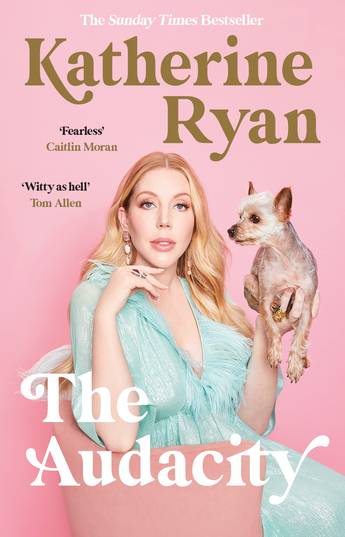 From the star of The Duchess and the host of 'Telling Everybody Everything', the debut book from superstar comedian Katherine Ryan.

'While I've been very blessed to have worked in comedy for over a decade, The Audacity gives me the opportunity to connect with people more fully and honestly than a panel show allows. I've learned to be a sharp-shooter on stage, but there are so many stories that I'm eager to tell in more sincere, longer form. I hope it gives people a laugh, an insight, and hopefully some encouragement on how to live their most fulfilled, authentic lives.'

Detailing Katherine's journey from a naive ex-Hooters waitress fresh off the boat from Canada to comedy megastar, chapters will cover How to Potty Train Your Baby at 10 Months, How to Cut Off Your Racist Aunties, How to Marry Your High School Boyfriend and How to Co-Parent when you're a Single Mum.

The Audacity combines Katherine's unerring ear for the perfect line with the warmth, compassion and hard-won wisdom that makes up a life on and off stage.
More books by this author

Award-winning comedian, writer, presenter and actress, TV's Katherine Ryan, is currently dominating the television and live comedy scenes, both in the UK and abroad. Born and raised in Canada, she has lived in the UK since 2008 and currently lives in London with her daughter Violet and husband Bobby.

Katherine created, starred in, wrote and executive produced her Netflix Original sitcom, The Duchess, which was released in September 2020 and leapt to the top of the UK chart. Her latest stand-up show, Glitter Room, had a four-week sold-out run at London's Garrick Theatre following a sell-out nationwide tour. Katherine has filmed two critically-acclaimed Netflix stand-up specials - Glitter Room and In Trouble. She was only the second UK-based comedian to release a 60-minute global Netflix special, after Jimmy Carr and until December 2020, she was the only woman. She was also a judge on Netflix's first panel show The Fix.

Katherine will soon be seen hosting primetime BBC Two jewellery-making competition series, All That Glitters. She hosted the marquee all-female special of Channel 4's Cats Does Countdown and was a team captain on the most recent series of 8 Out of 10 Cats for E4. Katherine also co-hosted C4's 2019 tentpole Alternative Election Special with Krishnan Guru Murthy. She has been a stalwart on all the UK's major panel shows and has co-hosted six series of Your Face or Mine, alongside judging four series of Roast Battle for Comedy Central.

Outside of television, Katherine has sold-out venues across the world with her unique stand-up shows. Her upcoming 2021/2022 live show, MISSUS, will tour later this year with Live Nation. Katherine launched her hugely successful podcast, Telling Everybody Everything, in 2020 and it went straight to the top of the iTunes UK podcast chart.