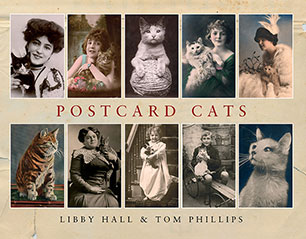 The stunning feline companion to the acclaimed Postcard Dogs.

Postcard Cats brings together over 225 beguiling cats from vintage postcards, conveying the more gently sentimental mood of the first half of the twentieth century. In a parade of felines which range from the exotic to the demotic, the spectacular to the vernacular, we can either guess at the stories that lie behind these private photographic cards of nameless cats with their anonymous owners or smile at the antics of kittens in the studios of commercial photographers. Or indeed merely wonder at the cat that finds safe refuge in the barrel of a ship's gun.

This is a stunning companion to the much-praised Postcard Dogs by Libby Hall who here joins forces with artist and fellow postcard enthusiast Tom Phillips. Between them they have left no card unturned in the search for quintessential cats and images emblematic of that strange and touching bond that has existed between the feline and the human animal for ten thousand years.
More books by this author

Tom Phillips is a Royal Academician whose other books on postcards include The Postcard Century and We Are the People. More of his work can be seen at www.tomphillips.co.uk. Born in 1937, he lives and works in Peckham.