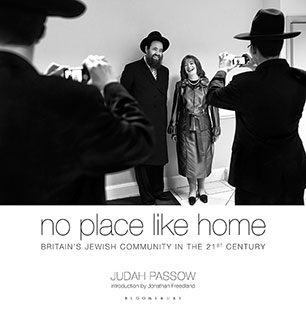 A portrait in words and magnificent black and white photographs of the variety and vibrancy of the British Jewish community today.

There is often a gap between how we see ourselves and how we really are. You might come to the glum conclusion that the Jewish Community in Britain is hostile to the outside world and driven by discord on the inside. Yet, as Judah Passow and Jonathan Freedland show, British-Jewish life hardly feels like that today. While once Jews whispered their identity, today they are much more out and proud.

Though antisemitism is a continuing presence, it is not the connective issue that binds the British Jewish community together. This collection explores the shared values which shape the cultural and political identity of the Jewish community in modern Britain. There are many forms of Jewish life, including religious life, in these islands, and Judah Passow's photographs document this plurality and variety in its many forms, with an extraordinary level of artistry and human perception. The text is written by Jonathan Freedland, eminent author, broadcaster and long time Guardian journalist.
More books by this author

Judah Passow is an award winning photographer and has recently been accorded a World Press Photo Award. He is a frequent lecturer on photojournalism at English universities and his work has appeared in publications as diverse as Der Spiegel, the Sunday Times and the New York Times. Jonathan Freedland is an award winning journalist long associated with the Guardian. He is the author of several books and presents programs on Radio and Television.