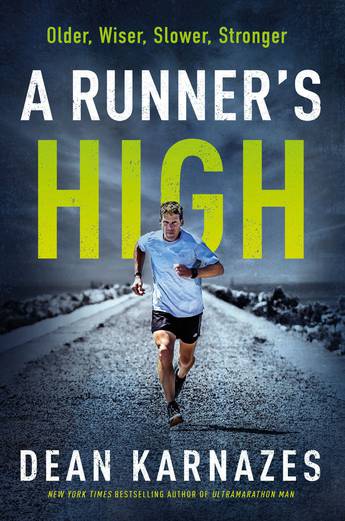 The iconic superhuman endurance runner embarks on his toughest challenge yet - the Western States 100-offering insights into why running is so challenging and rewarding.

Dean Karnazes has pushed his body and mind to inconceivable limits, from running in the shoe-melting heat of Death Valley to the lung-freezing cold of the South Pole. He's raced and competed across the globe and once ran 50 marathons, in 50 states, in 50 consecutive days.

In A Runner's High, Karnazes chronicles his return to the Western States 100-Mile Endurance Run in his mid-fifties after first completing the race decades ago. The Western States, infamous for its rugged terrain and extreme temperatures, becomes the most demanding competition of his life, a physical and emotional reckoning and a battle to stay true to one's purpose. Confronting his age, wearying body, career path and life choices, we see Karnazes as we never have before, raw and exposed. A Runner's High is both an endorphin-fuelled page-turner and a love letter to the sport from one of its most celebrated ambassadors.

'Running with Karnazes is like setting up one's easel next to Monet of Picasso.' - The New York Times

'The indefatigable human.' - Wired
More books by this author

Dean Karnazes is a two-time New York Times bestselling author and an icon in the running world. TIME magazine named Karnazes one of the '100 Most Influential People in the World.' An internationally acclaimed endurance athlete, he is the winner of an ESPN ESPY, a three-time winner of Competitor magazine's Endurance Sports Athlete of the Year award and the recipient of the President's Council on Sports Fitness & Nutrition Lifetime Achievement award. And to boot, he's run around the world naked (true story!) He lives in San Francisco.