Why Psychiatry is Doing More Harm Than Good 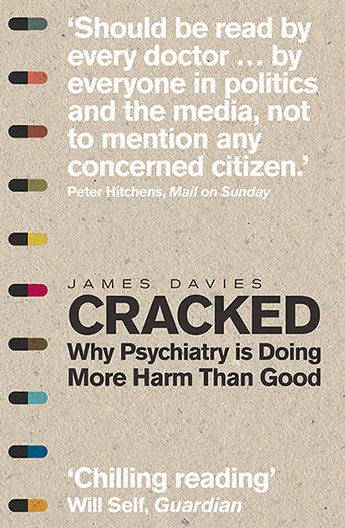 Controversial and powerful - a shocking indictment of the pseudo-science at the heart of modern psychiatry.

Why is psychiatry such big business? Why are so many psychiatric drugs prescribed and why, without solid scientific justification, has the number of mental disorders risen from 106 in 1952 to 374 today?

Controversial and powerful, Cracked - by psychological therapist James Davies - uses his insider knowledge to illustrate how psychiatry has put riches and medical status above patients' well-being.

Described as 'chilling' by Will Self in the Guardian and a 'potent polemic' by Bryan Appleyard in the Sunday Times, Davies reveals for the first time the true human cost of an industry that, in the name of helping others, has actually been helping itself.
More books by this author

James Davies obtained his PhD in medical and social anthropology from the University of Oxford. He is also a qualified psychotherapist (having worked in the NHS), and a senior lecturer in social anthropology and psychology at the University of Roehampton, London. He has delivered lectures at many universities, including Harvard, Brown, CUNY, Oxford and London, and has written articles about psychiatry for the New Scientist, Therapy Today and the Harvard Divinity Bulletin.