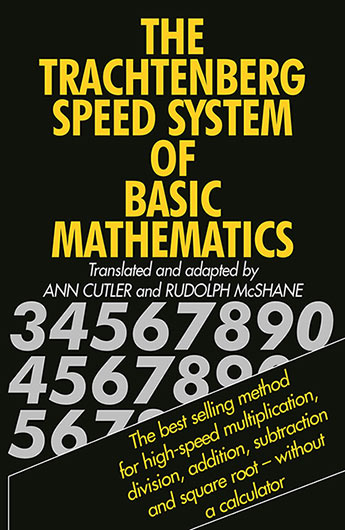 Do high-speed, complicated arithmetic in your head using the Trachtenberg Speed System.

Ever find yourself struggling to check a bill or tax on a payslip? The Trachtenberg Speed System provides a course in refining basic mathematics skills to tackle large sums before simplifying to increase concentration and ability in day-to-day arithmetic.

The Trachtenberg system has been described as the 'shorthand of mathematics' and only requires the ability to count from one to eleven. Using a series of simplified keys, it allows anyone to master numbers and calculations giving greater speed, ease in handling numbers and increasing accuracy.

Jakow Trachtenberg believed that everyone is born with phenomenal abilities to calculate. He devised a set of rules that allows every child to make multiplication, division, addition, subtraction and square-root calculations with unerring accuracy and at remarkable speed. A perfect entry into gaining confidence with numbers.
More books by this author More books in this series

Jakow Trachtenberg was a Jewish mathematician who developed the mental calculation techniques called the Trachtenberg system. He was born in Odessa, the Russian empire in 1988 and worked as an engineer in the Obukhov arms factory. He was a dedicated pacifist and instrumental in organising the Society of Good Samaritans when the First World War broke out. After the Russian revolutions of 1917, Trachtenberg fled to the Weimar Republic where he was later critical of Nazi policies and imprisoned in a concentration camp during World War II. He developed his system of mathematics during his imprisonment. He died in 1953.

What Does Rain Smell Like? Simon King, Clare Nasir