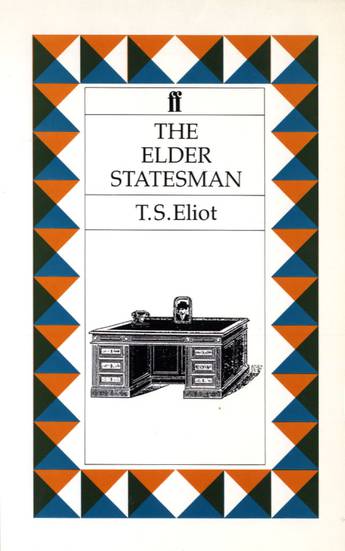 Download cover
Availability: Not available to order from this website, please try another retailer
T. S. Eliot's last play, drafted originally in 1955 but not completed until three years later. Lord Claverton, an eminent former cabinet minister and banker, is helped to confront his past by the love of his daughter, his Antigone.The dialogue in The Elder Statesman, the love scenes in particular, contain some of Eliot's most tender and expressive writing for the theatre. The play was first performed at the Edinburgh Festival in 1958.
More books by this author

Thomas Stearns Eliot was born in St Louis, Missouri in 1888. He was educated at Harvard, at the Sorbonne in Paris, and at Merton College, Oxford. His early poetry was profoundly influenced by the French symbolists, especially Baudelaire and Laforgue. In his academic studies he specialised in philosophy and logic. His doctoral thesis was on F. H. Bradley. He settled in England in 1915, the year in which he married Vivienne Haigh-Wood and also met his contemporary Ezra Pound for the first time. After teaching for a year or so he joined Lloyds Bank in the City of London in 1917, the year in which he published his first volume, Prufrock and Other Observations. In 1919 Poems was hand-printed by Leonard and Virginia Woolf. His first collection of essays, The Sacred Wood, appeared in 1920. His most famous work, The Waste Land, was published in 1922, the same year as James Joyce's Ulysses. The poem was included in the first issue of his jou