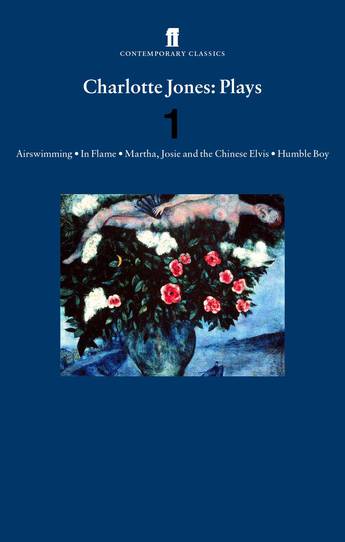 'The structure and writing - admirably clear and unsentimental - both trip the light fantastic too, effortlessly gliding from the desperately funny to the desperately sad.' GuardianIn Flame

'Watching Charlotte Jones's play, In Flame, is an experience of pleasure virtually unalloyed. It is funny, but with depth; painful, but with delicacy.' Financial Times'A play about life and death, love and lust, guilt and hope and dreams and the whole damn thing. It has some of the best writing I have come across recently: vigorous, poetic and lethally funny, probing hearts with warmth, compassion and irony.' Sunday TimesMartha, Josie and the Chinese Elvis

'What strikes one is the play's generosity of spirit and belief in human potential . . . confirms that Jones has a great future.' GuardianHumble Boy

Charlotte Jones's first play, Airswimming, was premièred at the Battersea Arts Centre, London and later broadcast on BBC Radio 4. In Flame was premièred in January 1999 at the Bush Theatre, London, and later revived at the New Ambassadors, London, in September 2000. Martha, Josie and the Chinese Elvis premièred at the Bolton Octagon in April 1999 and transferred to the Liverpool Everyman in May of that year. It won the Manchester Evening News Best Play Award and the Pearson Television Best Play Award of 1999. It was recently revived at the Watford Palace Theatre. Charlotte Jones won the Critics' Circle Award for Most Promising Playwright in 2000 for In Flame and Martha, Josie and the Chinese Elvis. Humble Boy was awarded the Susan Smith Blackburn Award, 2001, the Critics' Circle Best New Play Award, 2002, and the People's Choice Best New Play Award, 2002.