The Unofficial Guide to the Movies of Studio Ghibli 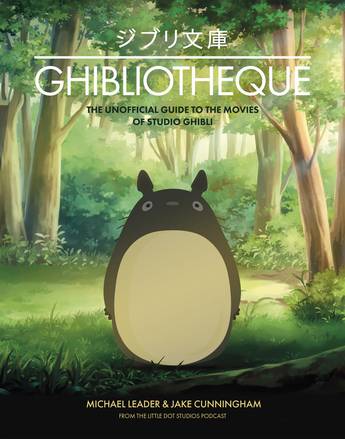 Based on the Ghibliotheque podcast, which leafs through the library of films from the world's greatest animation studio, this is a fully illustrated book that reviews each Studio Ghibli movie in turn.

Based on the Ghibliotheque podcast, which leafs through the library of films from the world's greatest animation studio, Studio Ghibli. A fully illustrated book that reviews each Studio Ghibli movie in turn, in the voice of expert and newcomer.

Will include details of production, release, themes, key scenes and general review as well as Ghibli-specific information. To be illustrated with stills and posters from each movie and (hopefully) portraits of directors, writers and creative team.
More books by this author

Michael Leader is a writer, broadcaster, podcaster and editor. He writes regularly forLittle White Lies andSight & Sound. He is Editorial Director of Film4 Online and he commissions the BBC Arts short-form essay strand, Inside Cinema. Michael hosts the Ghibliotheque and Truth & Movies podcasts, and has appeared on air on BBC Radio 4, BBC Radio 5 and the BBC World Service. He has hosted events at the BFI, the British Museum, the ICA, Somerset House and many cinemas. He lives in London.Jake Cunningham works on the Channel 4 short film programme Random Acts. As well as Ghibliotheque, he also hosts a podcast for Curzon Cinemas and is a contributor to theIndependent,Little White Lies and the BFI.

Category: Performing Arts
ISBN: 9781787396654
Table Of Contents: Introduction - to the movies, the podcast and the reviewing team.
Reviews - one chapter per movie: Nausicaa of the Valley of the Wind, Castle in the Sky, Grave of the Fireflies, My Neighbor Totoro, Kiki's Delivery Service, Only Yesterday, Porco Rosso, Pom Poko, Whisper of the Heart, Princess Mononoke, My Neighbours the Yamadas, Spirited Away, The Cat Returns, Howl's Moving Castle, Tales From Earthsea, Ponyo, The Secret World of Arrietty, From Up on Poppy Hill, The Wind Rises, The Tale of Princess Kaguya, When Marnie Was There, Ocean Waves, Earwig and the Witch*.
Filmography - with release dates, to include any other Studio Ghibli productions.
*2021 release expected.
Publisher: Welbeck
Imprint: Welbeck
Page Extent: 192
Format: Hard Cover
Subject: Animated films