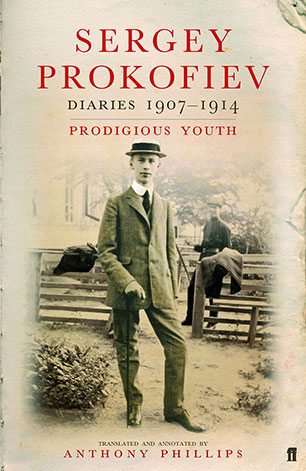 An entertaining source of reference for all scholars and lovers of Prokofiev's music.

Prokofiev, a compulsive diarist, gifted and idiosyncratic writer, possessed an incorrigibly sardonic curiosity about individuals and events. When he left Russia following the 1917 Revolution, his diaries were recovered from the family flat in Petrograd and later hidden. Prokofiev himself smuggled them out of the country after his first return to the Soviet Union in 1927. The later diaries, written in the West, were brought back by legal decree after the composer's death, to be kept in a special, inaccessible section of the Russian State Archive. Eventually Prokofiev's son Sviatoslav was allowed to transcribe the voluminous contents; when he and his son Sergei eventually emigrated to Paris they undertook the gigantic task of reproducing the partially encoded manuscript in an intelligible form.

Volume 1 covers the bulk of Prokofiev's years at the St Petersburg Conservatoire ending with his triumphant graduation. Simultaneously attached to and exasperated by the traditions exemplified at this time by Rimsky-Korsakov, Glazunov and Lyadov, the brash young genius relishes the power of his talent to irritate, challenge and finally overcome the establishment, alongside candid revelations of the all-too-normal preoccupations of a young man flexing his muscles in society.

Taken as a whole, the diaries constitute both an indispensable and an entertaining source of reference for all scholars and lovers of Prokofiev's music.
More books by this author

Anthony Phillips learnt Russian in the Secret Classrooms of National Service in the 1950s and later Oxford. The language continued to play an important part during his later career in music administration, during which he became general manager of London's Royal Festival Hall. Story of a Friendship, his translation of Shostakovich's letters to Isaak Gilkman, was published by Faber in 2000, and Anton Chekhov: A Life in Letters with Rosamund Bartlett) by Penguin Classics in 2004.