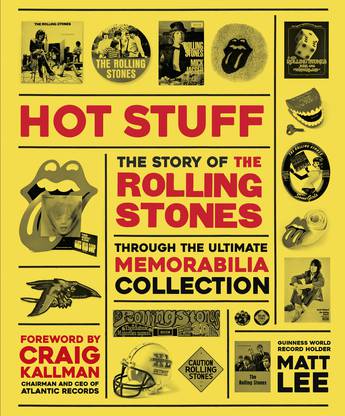 Matt Lee is an avid collector of Rolling Stones memorabilia, described byAnOther magazine as 'the world's number one collector'. At the Rolling Stones' exhibition at London's Saatchi Gallery, the band borrowed various items from Matt's collection to fill their gaps. He has seen them play live more than 150 times and has appeared on radio, print and TV in his capacity as 'biggest Stones fan of all time' [ITV], expert and talking head. He was in the news in 2018 following his discovery of a long-lost Mick Jagger/Carly Simon recording.

Category: Music
ISBN: 9781787393073
Table Of Contents: Matt Lee's collection includes many unique, handwritten and personal items as well as tickets, posters, backstage passes, promotional items, instruments, tapes, records and clothing. All have been specially photographed for this book and are accompanied by a narrative detailing rarity and in some cases the amusing anecdotes behind how they came to be part of the collection. A regular at Stones concerts, Matt personally collects many of the pieces, as well as buying at auction and exchanging. Highlights of the collection include: the Stones' first ever contract, the band's first acetate, Bill Wyman's resignation letter, the first 'tongue' pin, a signed Shine a Light guitar, original 'Street Fighting Man' record sleeve, handwritten set lists from Mick and Keith... and thousands more.
Publisher: Welbeck
Imprint: Welbeck
Page Extent: 256
Format: Hard Cover
Subject: Music