The larrikin Aussie legends who discovered the Vietcong's secret weapon 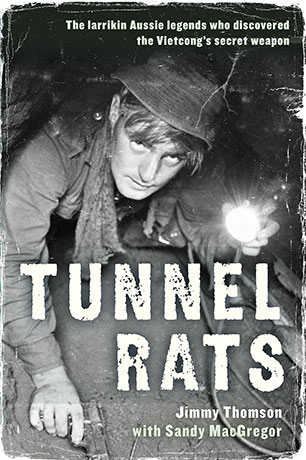 The thrilling story of the young Australian Army engineers of 3 Field Troop who were the first allied soldiers to risk their lives in the darkness of the Vietcong tunnels of South Vietnam.

They were young, they were Australian, they were Army engineers and they were the first allied soldiers to risk their lives in the darkness of the Vietcong tunnels of South Vietnam. Staring death squarely in the face every day, not only did they follow their enemy down into these unknown underground labyrinths, but matched the Vietcong's jungle warfare skills and defused thousands of their clever booby traps.

Off duty, it was a different story. The bad boys of 3 Field Troop were a boozing, brawling, bonking bunch of larrikins, who cut a swathe through the bars and brothels of Saigon, fought American Military Police to a standstill, built a secret casino and booby-trapped their own HQ to teach their officers a lesson.

Thrilling, inspiring and action packed, this is the true story of the unsung heroes of Australia's war in Vietnam. Living up to their motto of 'We Make and We Break', they created the legend of the Tunnel Rats.
More books by this author

Jimmy Thomson is a journalist, author and screenwriter whose credits include the ABC-TV series Rain Shadow. His most recent book is Snitch: Crooked cops and Kings Cross crims by the man who saw it all.

A graduate of the Royal Military College, Duntroon, as a young captain Sandy MacGregor commanded 3 Field Troop in Vietnam, where he won the Military Cross. He served in the Army for thirty years, finishing as a colonel in the Reserves.