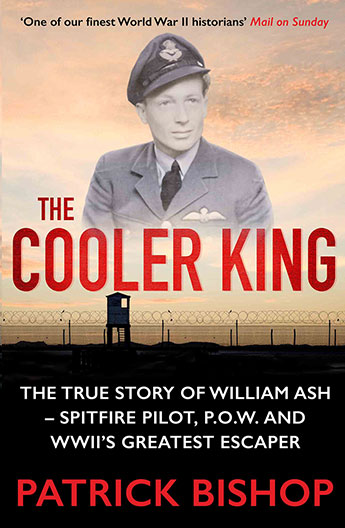 The true wartime story of William Ash - the inspiration for Steve McQueen's character in The Great Escape. A thrilling tale of incredible courage and resilience, from one of Britain's bestselling military historians.

The Cooler King tells the astonishing story of William Ash, an American flier brought up in Depression-hit Texas, who after being shot down in his Spitfire over France in early 1942 spent the rest of the war defying the Nazis by striving to escape from every prisoner of war camp in which he was incarcerated. It is a saga full of incident and high drama, including a breakout via a tunnel dug in the latrines of the Oflag XXIB prison camp in Poland - a great untold episode of the Second World War.

Alongside William Ash is a cast of fascinating characters, including Douglas Bader, Roger Bushell, who would go on to lead the Great Escape, and Paddy Barthropp, a dashing Battle of Britain pilot who despite his very different background became Ash's best friend and shared many of his adventures. By weaving together contemporary documents and interviews with Ash's comrades, Patrick Bishop vividly recreates the multiple escape attempts, while also examining the P.O.W. experience and analysing the passion that drove some prisoners to risk death in repeated bids for freedom.

The Cooler King is at once uplifting and inspirational, and stands as a testament to the durability of decent values and the invincible spirit of liberty.
More books by this author

Patrick Bishop spent twenty-six years covering numerous wars and conflicts around the world and he has reported from the front line of almost every major war of our era. He is the acclaimed author of Fighter Boys, Bomber Boys, Battle of Britain, 3 Para, Target Tirpitz, Wings and The Reckoning.