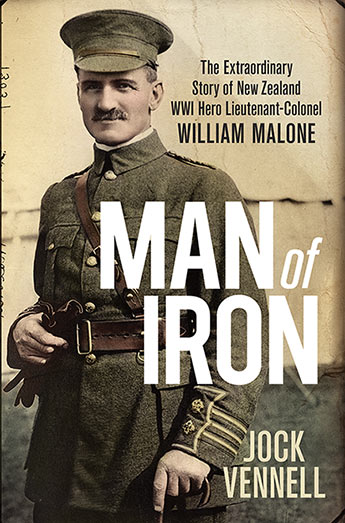 Lieutenant-Colonel William Malone is one of New Zealand's best-known First World War soldiers, having held off fierce Turkish counter-attacks for nearly two days before being killed by a shell from a British warship. The defence of Chunuk Bair has been described as one of New Zealand's finest hours. Malone and his men captured and held the heights of Chunuk Bair on the Gallipoli Peninsula in August 1915.

William Malone was not only an outstanding military leader, as commander of the Wellington Infantry Battalion, but also a successful farmer, lawyer and family man. His letters reveal a man unfulfilled by peacetime pursuits, and war offered him a liberation of spirit and a new sense of purpose. Leaving for the front, he wrote, 'I leave a lucrative practice, a happy home, a brave wife and children without any hesitation. I feel I am just beginning to live.'

This is the first biography of William Malone.
More books by this author

Jock Vennell is a Wellington based writer and historian. He is the author of The Forgotten General.