An Anzac's descent into death, disaster and controversy at Gallipoli 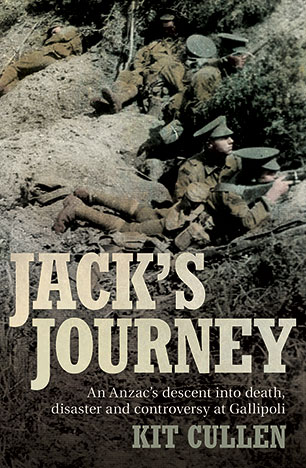 The moving and extraordinary story of an unheralded and virtually unknown Anzac action that occurred in Death Trap Valley on May 1st and 2nd 1915 during the period of the landing at Gallipoli and how the truth of what happened was corrupted by a noted historian.

Jack's Journey is the moving and extraordinary story of an unknown ANZAC action at Gallipoli during the period of the Landing on 1 and 2 May, 1915. Kit Cullen began tracing Jack Collyer's story using his three diaries and his service record. The diaries cover the voyage from Australia to training in Egypt and Lemnos and, finally, landing at Anzac. Unfortunately, the last diary ended as Jack entered the firing line on Bolton's Ridge at dusk on 25 April. He was wounded a week later. Where was Jack and what was he doing when he was wounded?

What Kit discovered over ten years of painstaking research is extraordinary. On 1 May Jack and about fifty other members of No. 15 Platoon 4th Battalion were ordered to go to the aid of about 60 Royal Marines who had been trapped for two and a half days in an isolated trench. The Marines were running out of ammunition and water and needed support. Before dawn Jack and his mates entered the valley, which they christened Death Trap Valley, before dawn and positioned themselves in Loutit's Post overlooking the Marines for most of the day under heavy enemy fire. The 4th Battalion's rescue mission was undertaken at the height of the third Turkish counter attack. At 3 o'clock in the afternoon the ANZACs were ordered to resupply the Marines with ammunition and water and to reinforce their line. To do so meant running the gauntlet of the death trap - an exposed fifty metre long track, marked by the Turks as a killing ground. As the platoon braved the death trap, one by one, most of them were killed or wounded, including Jack.

Snowy Robson carried ammunition and water to the beleaguered garrison without being hit. An hour later he also guided and took charge of No.3 Platoon 4th Battalion which was ordered into the valley to reinforce the isolated trench. In all, Snowy diced the death trap six times - five in daylight - without being hit. The position and the Marines were saved.

Five Allied gallantry medals were awarded for the action, including the first Victoria Cross at Anzac. Walter Parker, a Royal Marine stretcher bearer, was the recipient. Snowy Robson was awarded a Distinguished Conduct Medal for his feats.

The other extraordinary aspect of the 4th Battalion's participation in the action was the corruption of the historical record by Charles Bean. Bean omitted any reference to the 4th Battalion in his telling of the story in the Official History, despite knowing what happened. Instead, he gave the credit for saving the Marines to his brother's unit, the 3rd Battalion, which played a part on 2 May in relieving the Marines and the remnants of the two 4th Battalion parties. Bean misused a letter from the Royal Marine hierarchy specifically praising the 4th Battalion's sacrifice and courage, claiming its sentiments for the 3rd Battalion. The tragic heroism of Jack and his mates, and Bean's historiographical skulduggery would have remained hidden if Kit Cullen hadn't stumbled on them in the course of his research.

Kit Cullen is a high school English teacher from Wollongong. He has spent the past six years researching Jack's Journey.