A Life of Charlotte Mew 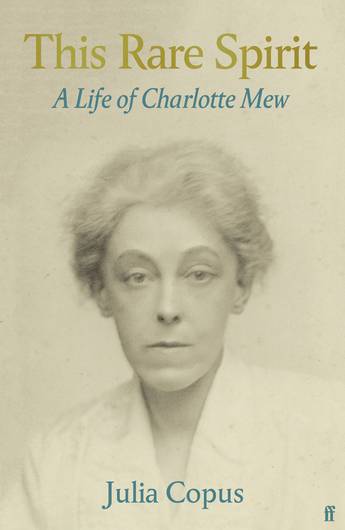 The first comprehensive biography of this undervalued writer, who was considered 'far and away the best living woman poet' in her day.

The British poet Charlotte Mew (1869-1928) was regarded as one of the best poets of her age by fellow writers, including Virginia Woolf, Siegfried Sasson, Walter de la Mare and Marianne Moore. She has since been neglected, but her star is beginning to rise again, all the more since her 150th anniversary in 2019. This is the first comprehensive biography, from cradle to grave, and is written by fellow poet Julia Copus, who recently unveiled a blue plaque on Mew's childhood house in Doughty Street and was the editor of the Selected Poetry and Prose (2019).

Mew was a curious mix of New Woman and stalwart Victorian. Her poems speak to us strongly today, in these strangely mixed times of exposure and seclusion: they reveal the private agony of an isolated being who was forced to keep secret the tragedies of her personal life while being at the same time propelled by her work into the public arena. Her poetry transfigures that very private suffering into art that has a universal resonance.
More books by this author

Charlotte Mew (1869-1928) was an English short-story writer and poet. Born in Bloomsbury into a middle-class Victorian family, her work was published and admired in both the UK and America. The first and only book of poems to appear in her lifetime, The Farmer's Bride, came out in 1916 when she was in her mid-forties. On the strength of it, Mew was awarded a Civil List pension, with recommendation from three of her most ardent admirers: Poet Laureate John Masefield, Walter de la Mare and Thomas Hardy.

Julia Copus has published four collections of poetry, including The World's Two Smallest Humans (2012), shortlisted for the T. S. Eliot Prize and the Costa Poetry Award, and Girlhood (2019).