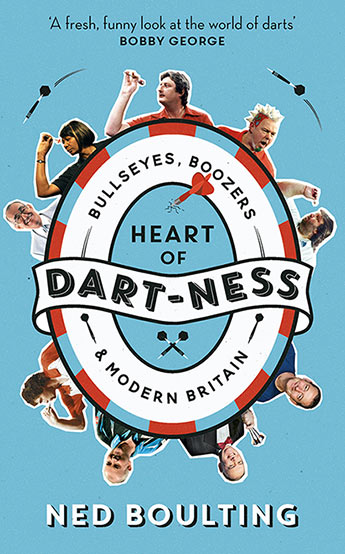 A funny and heartfelt, sideways look at modern Britain, through the story of darts.

In Heart of Dart-ness, TV's Ned Boulting sets out to answer the forty-something year old question: What exactly is darts? Is it a sport, a freak show, a side-show, a pantomime, a riot or a party?

From Purfleet to Minehead, Milton Keynes to Frankfurt, Ned embarks on a journey back to the beginning of the modern game. He tracks down some of the household names who graced childhood television screens and are still among us; names such as Andy Fordham, whose fifty bottles of Pils a day habit led to his near death on the oche, Cliff Lazarenko, whose prodigious drinking was the stuff of legend even among his not exactly abstemious peer-group, Phil Taylor, the greatest of all time, as well as the Europeans, Michael van Gerwen, and Raymond van Barneveld.

Is it entertainment, or exploitation? To answer that question, as well as every other, he learns that all roads lead to the Heart of Dart-ness, and the biggest character the game has ever produced, Eric Bristow.

Perhaps darts is after all, just exactly what it sets out to be; an anti-sport sport, a two-fingered salute to the establishment, a piss-up in a brewery, the ultimate escape. The best night out.
More books by this author

Ned Boulting started his broadcasting career at Sky in 1997, working as a reporter alongside Jeff Stelling on the now legendary show Soccer Saturday. In 2006 he was given the Royal Television Society's Sports Reporter of the Year Award. In addition to his work as a football reporter for ITV, he is now the 'voice of cycling', commentating on all the major (and some minor) bike races. He also contributes features and live reports on the darts for ITV. He is the author of four previous books including, the bestselling How I Won the Yellow Jumper.