The Gun, the Ship, and the Pen

Warfare, Constitutions and the Making of the Modern World 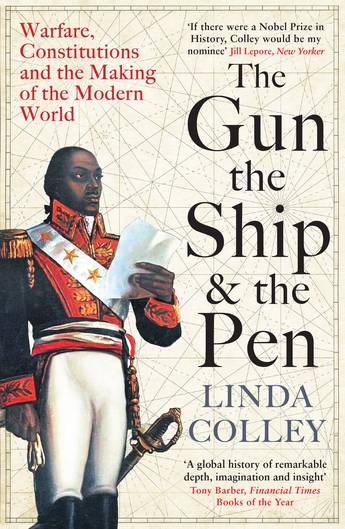 Award-winning historian Linda Colley re-examines the making of the modern world through the advance of written constitutions.

'If there were a Nobel Prize in History, Colley would be my nominee' - Jill Lepore, New Yorker
'One of the most exciting historians of her generation, but also one of the most interesting writers of non-fiction around' - William Dalrymple, Guardian
'Colley takes you on intellectual journeys you wouldn't think to take on your own, and when you arrive you wonder that you never did it before' - David Aaronovitch, the Times

Starting not with the United States, but with the Corsican constitution of 1755, The Gun, the Ship, and the Pen moves through every continent, disrupting accepted narratives. Both monarchs and radicals play a role, from Catherine the Great of Russia, with her remarkable Nakaz, to Sierra Leone's James Africanus Horton, to Tunisia's Khayr-al-Din, a creator of the first modern Islamic constitution. Throughout, Colley demonstrates how constitutions evolved in tandem with warfare, and how they have functioned to advance empire as well as promote nations, and worked to exclude as well as liberate.

Whether reinterpreting Japan's momentous 1889 constitution, or exploring the significance of the first constitution to enfranchise all adult women on Pitcairn Island in the Pacific in 1838, this is one of the most original global histories in decades.
More books by this author

Linda Colley is the Shelby M.C. Davis 1958 Professor of History at Princeton University, and a Fellow of both the British Academy and the Swedish Collegium for Advanced Study. Her seven books include Britons, winner of the Wolfson Prize, The Ordeal of Elizabeth Marsh, a New York Times top ten book of the year, and Acts of Union
and Disunion, based on a series of talks commissioned by BBC Radio 4. She divides her time between the USA and Europe.