Fidel Castro and the Making of the 1960s 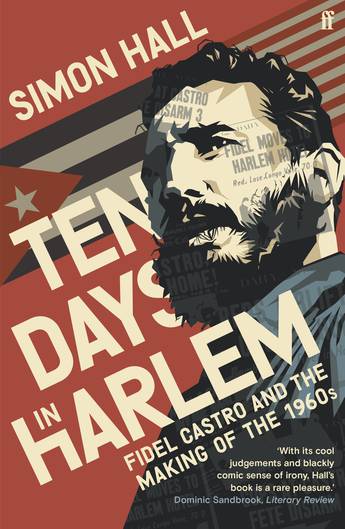 'With its cool judgements and blackly comic sense of irony, Hall's book is a rare pleasure to read.' - Dominic Sandbrook, Literary Review

'Simon Hall has captured this catalytic moment like no one before. Anyone interested in the "Global Sixties" must read Ten Days in Harlem.'- Van E. Gosse, Professor and Associate Chair of History, Program Chair of Africana Studies, Franklin & Marshall College

New York City, September 1960. Fidel Castro - champion of the oppressed, scourge of colonialism, and leftist revolutionary - arrives for the opening of the United Nations General Assembly. His visit to the UN represents a golden opportunity to make his mark on the world stage.

Fidel's shock arrival in Harlem is met with a rapturous reception from the local African American community. He holds court from the iconic Hotel Theresa as a succession of world leaders, black freedom fighters and counter-cultural luminaries - everyone from Nikita Khrushchev to Gamal Abdel Nasser, Malcolm X to Allen Ginsberg - come calling. Then, during his landmark address to the UN General Assembly - one of the longest speeches in the organisation's history - he promotes the politics of anti-imperialism with a fervour, and an audacity, that makes him an icon of the 1960s.

In this unforgettable slice of modern history, Simon Hall reveals how these ten days were a foundational moment in the trajectory of the Cold War, a turning point in the history of anti-colonial struggle, and a launching pad for the social, cultural and political tumult of the decade that followed.
More books by this author

Simon Hall studied history at Sheffield and Cambridge, and held a Fox International Fellowship at Yale, before moving to the University of Leeds, where he is currently Professor of Modern History. His previous books include 1956: The World in Revolt (Faber).