Brave, compassionate and tough, the making of Australia's modern diggers 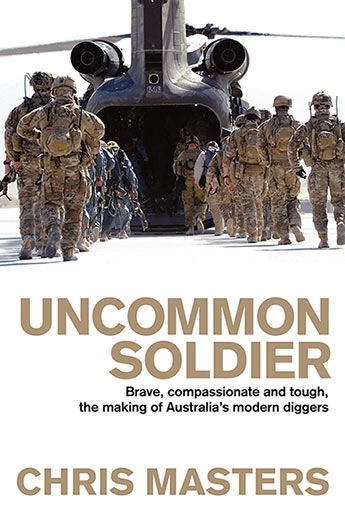 The result of a six year immersive investigation, this is a penetrating and significant exploration of the nature of the modern Australian soldier - fighter, peacekeeper, street-level diplomat, aid worker.

'If you read only one book related to Anzac Day.make it Uncommon Soldier. Masters has produced a fair-minded, clear-eyed study of the contemporary Australian Army.' - Saturday Age

'Chris Masters' Uncommon Soldier is an uncommon book.He writes as the fine journalist that he is.' - Daily Telegraph

'A rare and in-depth analysis of the present-day Digger paints a candid picture of army life.' - Sydney Morning Herald

Chris Masters turns his penetrating gaze on the young men and women who make up the Australian Army. Having been taken into their ranks in a way rarely afforded an outsider, he gives heart and soul to the contemporary digger: how they are selected, how they are led, and how they are transformed from civilians to disciplined professional soldiers. And by sharing their experiences, he puts under severe challenge that soldiering is the province of dumb grunts.

Chris Masters is Australia's best-known investigative reporter, and is the author of the bestselling Jonestown (2006). In 1985, he won Australia's most prestigious award in journalism, the Gold Walkley, for his Four Corners report on the sinking of the Rainbow Warrior. His reports 'The Big League' and 'The Moonlight State' both led to royal commissions that helped transform the nation.