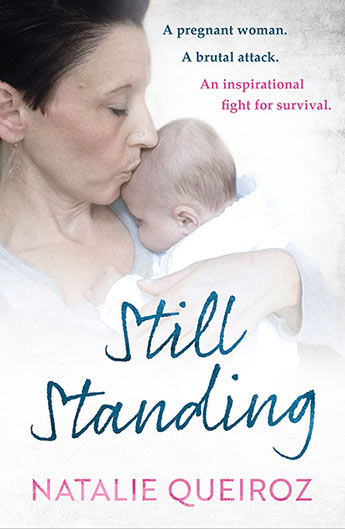 An unputdownable, inspirational memoir of survival and recovery after a truly savage attack.

Natalie Queiroz was eight months pregnant when she was stabbed by her partner in the most vicious attack imaginable.

In the space of nine minutes, and in broad daylight, Natalie was stabbed twenty-four times with a carving knife. She suffered horrific wounds to her lungs, liver, stomach and uterus, whilst the knife missed her baby by a margin of two millimeters, before the arteries in her wrists were methodically severed by the hooded attacker she finally realised was her partner and the father of her unborn child.

After heroic intervention by passers-by and police, the attack was brought to an end, but her ordeal was not over. An air ambulance rescue was launched, and against all medical odds, Natalie and her baby survived - but not without life-changing physical and emotional damage.

Still Standing is the story of one life-shattering event - what came before that fateful day, what happened on the day itself, and how one woman and her baby survived to rebuild and heal together after it. At once a shocking story of evil, manipulation and violence, and a truly moving reminder that a life can be pieced back together, no matter how bad the damage, this book will empower and inspire anyone who has ever faced true adversity to rise up and stand tall.
More books by this author

Natalie Queiroz is the survivor of one of the most appallingly brutal attacks imaginable. After being stabbed two dozen times by her partner when she was eight months pregnant, she has rebuilt her life and inspired people the length and breadth of the country with her courage and refusal to be bowed by her trauma. Alongside a successful full-time career, she has since become a motivational speaker and, through various feats of endurance and daring, raised thousands of pounds for the Midlands Air Ambulance charity she owes her life to.