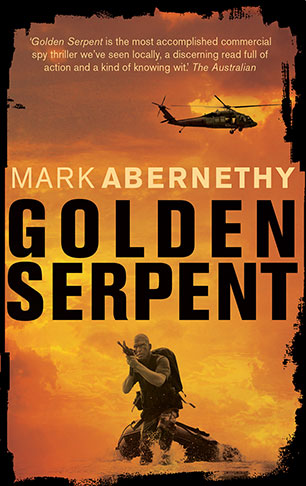 Meet Alan McQueen - a tough, true-blue Aussie spy - in a fast-paced and action-packed thriller. He's on the trail of Abu Sabaya, the world's most dangerous terrorist - a man he thought he'd killed years ago.

Alan McQueen, aka Mac, was once a star of the global intelligence community, renowned for being the Aussie spook who shot and killed Abu Sabaya, the world's most dangerous terrorist.

Now, during a routine assignment in Indonesia, McQueen discovers that Sabaya is not in fact dead. Instead he's teamed up with rogue CIA veteran Peter Garrison and is armed with a cache of stolen VX nerve agent he's threatening to deploy in a dramatic and deadly manner.

Battling to stay one step ahead of Sabaya's hit-men, CIA double-agents and deep corruption within Australian intelligence, Mac must find the stolen VX before it's too late. His mission will take him on a chase through South-East Asia and test all of his considerable courage and ingenuity.

Brilliantly written and action-packed, Golden Serpent will enthral fans of Andy McNab, Tom Clancy, Lee Child and Robert Ludlum. Guaranteed to satisfy even the most seasoned spy-thriller aficionado.
More books by this author More books in this series

Mark Abernethy is a speechwriter, journalist and author. Born in New Zealand, he has lived in Australia for most of his adult life. A former editor at Australian Penthouse magazine, he now writes for The Bulletin and the Australian Financial Review .