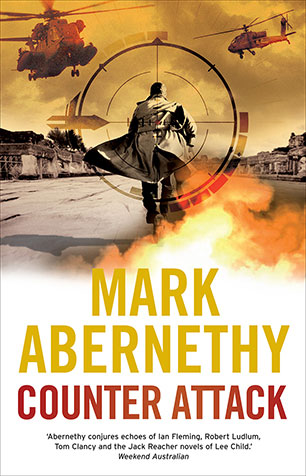 Lured out of retirement, super-spy Alan 'Mac' McQueen is on a mission to prevent the ambitions of one man to overthrow the Chinese government and reduce Asia to radioactive ashes. With action sequences to rival the most expensive Hollywood blockbuster, Counter Attack is an explosive thriller - sure to keep you up all night.

Australia's super-spy, Alan McQueen, has been lured out of retirement. Any dreams Mac has of a cosy office job are shattered when he's dispatched to Singapore to oversee a covert mission. And when things go disastrously wrong, he not only has to defend his reputation in Australia but also stay out of jail in Vietnam.

From the leafy suburbs of Singapore to the mean streets of Saigon, from the political infighting of Canberra to the old killing fields of Northern Cambodia, Mac has to use all his cunning - and a few unusual alliances - to get to the bottom of a conspiracy that could throw the world into a thermo-nuclear showdown. When nothing is what it seems, and death is only one mistake away,

Mac finds himself both hunter and hunted as he pursues a truth that could save millions of lives.
More books by this author More books in this series

Mark Abernethy is a speechwriter, ghostwriter, journalist and author. Born in New Zealand, he has lived in Australia for most of his adult life. A former editor at Australian Penthouse magazine, he has also written for the Australian Financial Review.