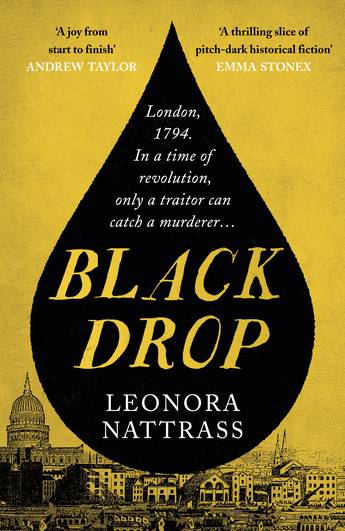 An atmospheric and brilliantly plotted historical thriller set in London during the uproar of the French Revolution.

This is the confession of Laurence Jago. Clerk. Gentleman. Reluctant spy.

July 1794, and the streets of London are filled with rumours of revolution. Political radical Thomas Hardy is to go on trial for treason, the war against the French is not going in Britain's favour, and negotiations with the independent American colonies are on a knife edge.

Laurence Jago - clerk to the Foreign Office - is ever more reliant on the Black Drop to ease his nightmares. A highly sensitive letter has been leaked to the press, which may lead to the destruction of the British Army, and Laurence is a suspect. Then he discovers the body of a fellow clerk, supposedly a suicide.

Blame for the leak is shifted to the dead man, but even as the body is taken to the anatomists, Laurence is certain both of his friend's innocence, and that he was murdered. But after years of hiding his own secrets from his powerful employers, and at a time when even the slightest hint of treason can lead to the gallows, how can Laurence find the true culprit without incriminating himself?

'Well written and well constructed, Jago is a character that readers will want to follow' - ALIX NATHAN

'Superb. Vivid and fast-paced, it's an impressive achievement and hugely enjoyable' - GUY MORPUSS
More books by this author

Leonora Nattrass studied eighteenth-century literature and politics, and spent ten years as an English Literature lecturer, including eight at Nottingham Trent University. During this time she published several works on William Cobbett, and was a reviewer for The Year's Work in English Studies journal. She then moved to Cornwall, where she lives in a seventeenth-century house with seventeenth-century draughts, and spins the fleeces of her traditional Ryeland sheep into yarn. Black Drop is her first novel.