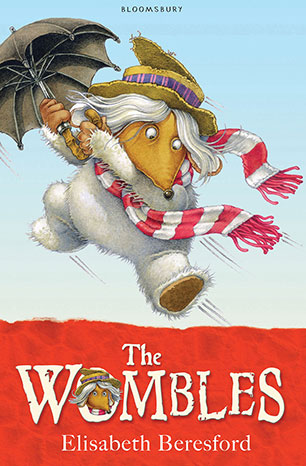 The Wombles live in a beautifully snug, well-ordered and cosy burrow underneath Wimbledon Common - the perfect base from which to sort and recycle all the rubbish that unthinking humans constantly drop. First published over 40 years ago, the Wombles books are back to entertain a whole new generation with their charming characters and environmental themes. This is the first book in the series.

The Wombles is the first ever Wombles book and introduces the stern but kindly Great Uncle Bulgaria; Orinoco, who is particularly fond of his food and a subsequent forty winks; general handyman extraordinaire Tobermory, who can turn almost anything that the Wombles retrieve from Wimbledon Common into something useful; Madame Cholet, who cooks the most delicious and natural foods to keep the Wombles happy and contented; and last but not least, Bungo, one of the youngest and cheekiest Wombles of all, who has much to learn and is due to venture out on to the common on his own for the very first time...
'A lively, entertaining and humorous book, stuffed with ingenious ideas and endearing characters' - The Times
'Over 40 years after the original book, The Wombles is reprinted, their recycling ways more relevant than ever' - Junior
More books by this author

Elisabeth Beresford first came up with the idea for the Wombles characters when walking on Wimbledon Common with her two children. She started sketching out the characters that day: Great Uncle Bulgaria was based on her father-in-law, Tobermory on her brother (an inventor), Orinoco on her son, and Madame Cholet on her mother. She hoped that the Wombles stories would encourage children to fight pollution and to think up ways of 'making good use of bad rubbish'. In fact, the Wombles so charmed the nation that they were chosen as the mascots for the Tidy Britain campaign. Since then they have had their own television series, first broadcast on Jackanory.
Elisabeth Beresford was awarded an MBE for her services to children's literature in 1998 and she now lives in Alderney, the Channel Islands.