Supersaurs 1: The Raptors of Paradise 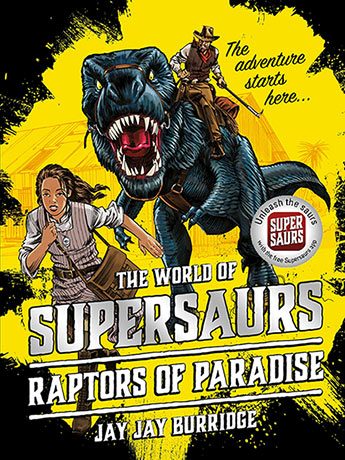 What would the world look like if dinosaurs had never died out? A thrilling new adventure series which will have readers on the edge of their seat!

Imagine a world where dinosaurs have survived and evolved as...SUPERSAURS. This is the world that Bea Kingsley lives in, a world where humans live side by side with supersaurs, sometimes in peace but often in conflict.

Bea is the daughter of explorer parents who went missing when she was just a baby. So when her grandmother suddenly takes her on a trip to the remote Indonesian islands of Aru, Bea starts asking some big questions. But the more questions Bea asks, the more trouble she and her grandmother find themselves in. Was the journey to the islands a big mistake?

SUPERSAURS: RAPTORS OF PARADISE is the launch of a major new six book series for children, illustrated throughout with magnificent black and white artwork. The ground-breaking Supersaurs app uses state-of-the-art augmented reality to make the world of Supersaurs literally leap off the page and into the real world...
More books by this author

Jay Jay Burridge is a fine art sculptor who studied at Central Saint Martin's College of Art and Design. For his degree show he made a forty foot long, self assembled dinosaur skeleton out of MDF.

In 1994 he took over from the legendary children's TV presenter Tony Hart writing and co-presenting the TV show SMart for the BBC. This grew into three spin-off series and touring live shows. Jay then turned his attention to a career in commercial art for brands such as Sony, Adidas, and Levis. It was not long before he started up his own custom- made trucker cap brand, Lucky Seven Caps.

In the summer of 2010 he returned to his favourite dinosaurs and exhibited his supersaurs sculptures in a one man show in Beverly Hills, LA. The eighty-thousand square-foot space was filled with nine full-sized supersaurs. With his friend Jamie Oliver, he created the Dinersaur Diner, situated in the heart of Piccadilly Circus.

Jay lives in Oxfordshire with his family.