From the Mixed-Up Files of Mrs. Basil E. Frankweiler 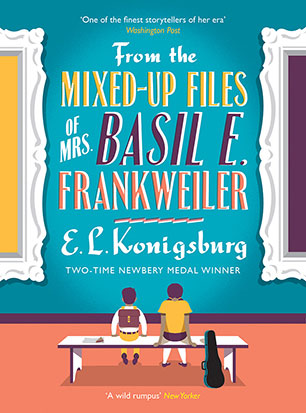 The million-selling, Newbery Medal-winning classic novel, one of the most celebrated and beloved children's books of all time.

New York City girl Claudia, a mere month shy of being a twelve-year-old, has resolved to run away from home with her younger brother, Jamie. She knows that she could never pull off the classic spur-of-the-moment departure without a destination (inevitably involving having to eat outside with the insects, and cupcakes melting in the sun); so she plans everything to perfection, including their destination: the grand, elegant, beautiful, all-encompassing Metropolitan Museum of Art.

However, no sooner have Claudia and Jamie settled into their new home, than they are caught up in the mystery of an angel statue bought by the museum for the bargain price of $225. Is it in fact an as yet undiscovered work by Michelangelo, worth millions? Claudia is determined to find out, and her quest leads her to the remarkable, secretive Mrs. Frankweiler, who sold the statue to the museum - and to some equally remarkable discoveries about herself.

Since its first appearance nearly 50 years ago, The Mixed Up Files of Mrs. Basil E. Frankweiler has gained a place in the hearts of generations of readers - and has rightly become one of the most celebrated and beloved children's books of all time.

The writer and illustrator E. L. Konigsburg (1930-2013) is one of the most celebrated writers of books for children and young adults. She won the prestigious Newbery Medal twice (nearly thirty years apart!), and is the only author to have won the Newbery Medal and Newbery Honor in the same year.

Mrs Basil E. Frankweiler wishes to change her will and is writing to her lawyer Saxenberg to explain her changes and the reasons for them. To make things perfectly clear, she then writes the story of Claudia and James Kincaid, two children from Greenwich who are never going to enjoy the sort of wealth she has but who cross her path after a series of intriguing adventures.

Claudia is tired of being the eldest of four and decides she will run away to make her parents take more notice of her and she chooses her middle brother Jamie to go with her, not only because she likes him the best but he is the one with the money – mostly gained from cheating at a card game with his school mates. They complemented each other perfectly. She was cautious about everything but money; he was adventurous about everything but money. Deciding that hiding in plain sight is probably the best option Claudia chooses the Metropolitan Museum of Art in New York and armed with $28.61 they set off on their life changing adventure.

All goes well for them until Claudia is struck by the mystery surrounding a new statue that is drawing huge crowds to the Museum. Is it really by Michelangelo? Determined to solve the mystery while still maintaining their daily routines like putting on clean underwear, Claudia and Jamie have to use all their wits, intelligence and money-sense to remain undiscovered until Claudia decides to visit the statue’s previous owner Mrs Basil E. Frankweiler, a somewhat eccentric old lady who seems to understand both children very well.

Originally published in 1967, it won the Newbery Medal the following year for the most distinguished contribution to American literature for children and has become a modern classic for independent readers. Not only that, the Museum gets so many questions about the book that they have devoted a whole issue of the Museum Kids newsletter to it; there is a movie made of it and the Internet is sprinkled with lesson plans, reviews and other guides. Regardless of it perhaps appearing to be a little old-fashioned for today’s readers, nevertheless it is an engaging story that those who are ready for and wanting a solid read. I’m glad I left it till I had time to give it its due.
Barbara Braxton, Teacher Librarian, NSW