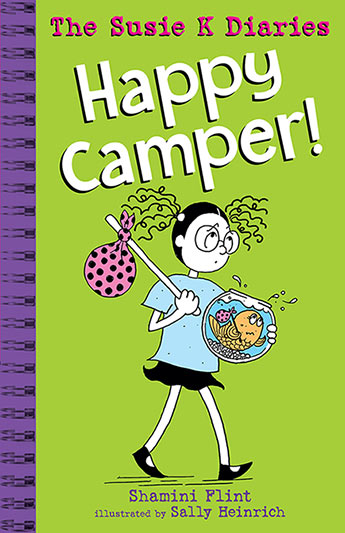 Susie K is a gung-ho camper (not!) - but her mum is convinced that Susie can make it in the rugged outdoors ...

Susie K likes science instead of netball and has the class goldfish for a best friend. But Susie's mum finds it hard to believe that she's happy that way. She's constantly trying to push Susie (with the best of intentions, of course!) to be something she's not. And the last thing Susie wants is to disappoint her mum...

Susie's mum is overjoyed about the upcoming camping trip... only Susie doesn't know the first thing about outdoor survival. So even though Susie would much rather be at home ordering pizza, she uses all her problem-solving skills to become a happy camper!

Shamini Flint lives in Singapore with her husband and two children. She began her career in law in Malaysia and also worked at an international law firm in Singapore. She travelled extensively around Asia for her work, before resigning to be a stay-at-home mum, writer, part-time lecturer and environmental activist, all in an effort to make up for her 'evil' past as a corporate lawyer! Shamini has written many books for adults and children, including the popular Diary of a Soccer Star series.

Sally Heinrich is an illustrator, printmaker and writer, who has published and exhibited widely in Australia and Asia. She has illustrated more than forty books, including Diary of a Soccer Star series. Her picture book One Step at a Time was an Honour Book in the CBCA Picture Book of the Year Awards, and her most recent Papa Sky, is a Notable Book. Her commissioned artwork ranges from wine labels to a mural for the Singapore Zoo and community arts projects. Sally has lived in Singapore, Sydney and Darwin and is now living in Adelaide. When she's not at her desk drawing, she is often out in the bush, walking and camping and occasionally getting lost.