Home>Browse>Books>Children's>Beyond the End of the World: The Other Side of the Sky 2

Beyond the End of the World: The Other Side of the Sky 2 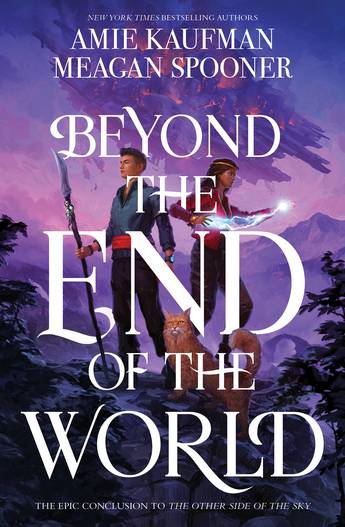 Compelling and magnetic, this much-anticipated sequel to New York Times bestselling authors Amie Kaufman and Meagan Spooner's The Other Side of the Sky has something for every reader: a star-crossed love full of tantalising longing, unique and immersive new worlds to explore, and nonstop thrills that escalate into an unforgettably electric conclusion.

Nimh still holds on to her divinity, if only by a thread. In her final confrontation with Inshara, the woman determined to take her place and rule Nimh's kingdom, both Nimh and her enemy were sent to the world above, in the cloudlands.

Now North looks to the sky, left behind on the surface world. Desperate for a chance to join the girl he loves and save his world, North will stop at nothing to find a way back to his home in the sky-city of Ciel. Before it's too late to save anyone.

But more awaits them in the world above than North or Nimh could ever expect. And as they come together and team up with allies from above and below, they face an ultimate test of their bond, their abilities, and their belief in each other in a quest to save their worlds.

PRAISE FOR THE OTHER SIDE OF THE SKY
'A vivid and compulsive thriller set in a beautiful, perilous world of myths and treachery. You won't want to put it down.' Laini Taylor, New York Times bestselling author of the Daughter of Smoke and Bone series

'I was left breathless by the book's twists and turns, and was unprepared for the ending - it blew me away. Stop everything and read it!' C.S. Pacat, bestselling author of Dark Rise and the Captive Prince series
More books by this author More books in this series

Amie Kaufman and Meagan Spooner are long-time friends and sometime flatmates who have travelled the world (but not yet the galaxy), covering every continent between them. Amie, who is the co-author of the Illuminae Files and the Aurora Cycle, lives in Melbourne, Australia. Meagan, who is also the author of the Hunted trilogy, lives in North Carolina in the US (though she considers herself an honorary Aussie). Together, they are the authors of The Other Side of the Sky, These Broken Stars and the rest of the Starbound trilogy. You can find them at www.amiekaufman.com and www.meaganspooner.com