To Throw Away Unopened 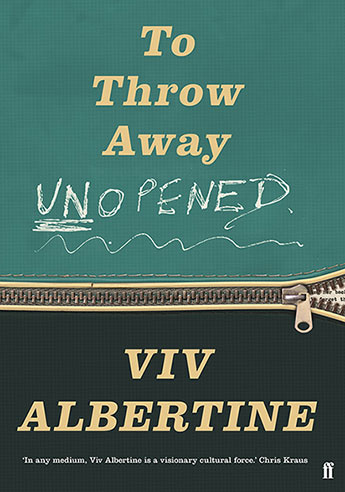 Brave, intimate, and deeply confessional, this is the long-awaited follow-up to Viv Albertine's sensational bestselling memoir.

At the launch party for her memoir in 2014, the musician Viv Albertine received news that her mother was dying, and spent a few final hours with the woman who was, in a sense, the love of her life. In the turbulent weeks after the funeral, Viv made a series of discoveries that revealed the role of family conflicts in propelling her towards the uncompromising world of punk.

Part radical reinvention of the memoir form; part feminist manifesto; part domestic noir; part polemic on motherhood; To Throw Away Unopened is an indefinable book exploring the nature of intimacy. Unapologetically honest, this is a story of human dysfunctionality which miraculously reveals how we do manage to function, live, and love.
More books by this author

Born in Sydney, songwriter and musician Viv Albertine was the guitarist in cult female punk band The Slits. She was a key player in British counter-culture before her career in TV and film Directing. Her first solo album The Vermilion Border was released in 2012, and her memoir, Clothes, Clothes, Clothes, Music, Music, Music, Boys, Boys, Boys was a Sunday Times, Mojo, Rough Trade, and NME Book of the Year in 2014, as well as being shortlisted for the National Book Awards.