Mrs D is Going Within 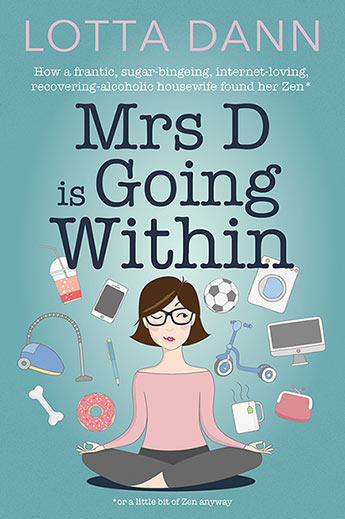 Lotta Dann should have it all sorted. She's quit a dysfunctional drinking habit, has written a bestselling memoir and has launched a website to help others get sober. Life should be sweet, right? Wrong.

Despite outward appearances, three years after getting sober Lotta is struggling to deal with life in the raw. It's becoming abundantly clear what people mean when they say that putting down the drink is just the beginning.

Truth is, Lotta's lifelong heavy-drinking habit has left her as a fledgling emotionally. She's slowly accepting that she needs to do some more work on herself. But what? Please don't say it has to involve turning into a hippy. Can't she just comfort herself with another chocolate muffin, distract herself on Instagram and hope for the best? It would appear not.

In Mrs D Is Going Within Lotta outlines the practices she developed and strategies she worked on to start establishing herself as an emotionally robust woman.
More books by this author

Lotta Dann drank alcohol steadily and heavily from the age of 15 to the age of 39. She stopped drinking only when her habit had reduced her to a sloppy, miserable mess and it became awfully apparent she had no control over her intake. She wrote her way sober with the help of an anonymous blog called 'Mrs. D Is Going Without', which started out small but slowly turned into something incredibly popular and powerful. Her bestselling memoir Mrs. D Is Going Without was published 3 years after she stopped drinking. Since its release Lotta has spent her days parenting and running a busy household, promoting recovery through her blogs and social media accounts, and managing the Living Sober website. Her second book explores the next stage recovery work she did to establish herself as an emotionally robust woman.