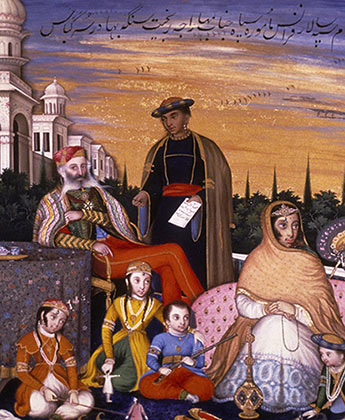 New edition of a lost classic (first published 1929), now complete with an introduction by the acclaimed writer and historian, William Dalrymple

Around 200 years ago in Lahore, deserters across Europe intermingled with sophisticated ex-Napoleonic officers for the chance to fight for Maharaja Ranjit Singh, who sought to create Asia's most powerful army in anticipation of a clash with the British Empire.
Conspicuous among them were a Scots-American soldier-of-fortune who single-handedly defended Lahore by blowing up 300 furious fanatics, a Neapolitan general whose blood-lust for extreme forms of punitive justice inspired fear in Sikhs and Afghans alike, and the son of an Irish sailor who had ruled a small Indian principality as the Raja of Tipperary.
More books by this author

After retiring from the North-Western Railway in 1918, CHARLES GREY retired to Lahore where he became an amateur scholar of early European interactions with Asia. HLO GARRETT was an eminent professor of history and a principal of Government College, Lahore. He was Keeper of the Records of the Punjab Government and also the first Director of the Punjab Archives (1923-36).
WILLIAM DALRYMPLE is the bestselling author of In Xanadu, City of Djinns, White Mughals and Koh-i-Noor. He is a founder of the Jaipur Literature Festival, a regular contributor to the New Yorker, the Guardian, the TLS, and the New York Review of Books, and the India correspondent of the New Statesman.