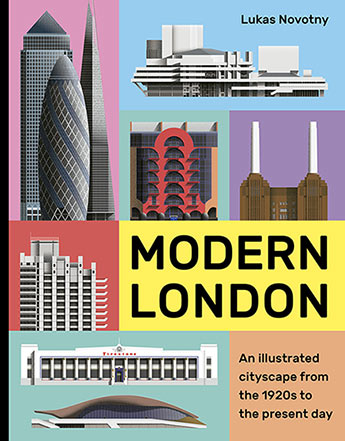 An illustrated exploration of London's evolving landscape, from the art deco factories of the 1920s to the skyscraper boom of the twenty-first century.

From the art deco factories of the 1920s through to the skyscraper boom of the twenty-first century, Modern London takes you on an illustrated tour of the capitals ever-changing landscape. Shaped variously by war, economics, population growth and design trends, the city has been moulded by some of the greatest modern architects and to this day remains a centre of building design and experimentation. Through intricate graphic illustrations and accessible, entertaining text, London's streets, structures and transport systems of the last century are brought to life. Discover long lost treasures such as the Croydon Air Terminal, home to the worlds first air control tower, and marvel at modern-day masterpieces like the London Aquatics Centre; delight in previously vilified social housing projects such as the Golden Lane Estate, and discover the drama behind bold, eccentric designs like the Walkie Talkie. The city's skyline can change in an instant; Modern London invites you to sit back and survey the scene so far.
More books by this author More books in this series

Lukas Novotny is a freelance multidisciplinary designer currently based in London. Alongside art direction, branding and paper engineering, he is also a keen illustrator. He has a background in Civil Engineering and Architecture.