Twelve Months with the All Blacks 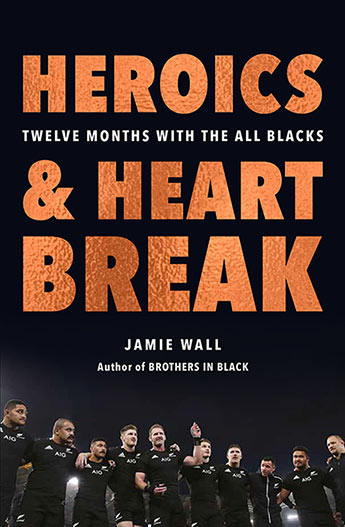 The story of the All Blacks campaign for the 2019 Rugby World Cup, with insightful analysis and full commentary.

What happened to the All Blacks at the 2019 Rugby World Cup?

They were aiming for their third title in a row. A win would have capped a decade of dominance for the team and provided a fitting end to the careers of Steve Hansen and Kieran Read.

But it turned out to be a much tougher challenge, and ended in crushing failure. Heroics & Heartbreak is Jamie Wall's story of the campaign, from someone who was there every step of the way.

The campaign for the cup started with the end-of-year tour in October 2018. It was a hard slog, with the team clearly feeling the effects of a long season. Notably, Hansen and Read came under considerable scrutiny throughout.

The signs were there that most of the other test-playing nations had gained some serious ground on the All Blacks in the past couple of seasons, seen in the results against England and Ireland on that tour.

Jamie analyses the campaign and the All Blacks' games, trainings, press conferences and dramas throughout the World Cup as he follows the team in Japan.

The climax was not the one that the All Blacks wanted, and signals a new era in world rugby. It may prove to be a defining moment for the game in New Zealand as well.
More books by this author

Jamie Wall is a freelance sports writer, specialising in rugby, and is the author of Brothers in Black. He covers live sporting events and delves into the deeper socio-political implications that sports, especially rugby, can bring. He has worked for The Spinoff, Radio New Zealand and Maori Television. Over the past two seasons, Jamie has travelled with the All Blacks to Buenos Aires, Sydney, Tokyo, London, Dublin and Rome, as well as the 2019 Rugby World Cup.