The Men Who Persevered 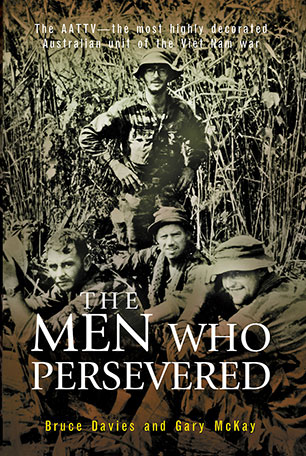 A history of the Australian Army Training Team in Vietnam, as told through the personal recollections of the men who served in the Team from 1962-1972.

The first Australians committed to serve in Viet Nam were a group of military instructors known as the Australian Army Training Team Vietnam. Their initial role: to assist in the training of the ground forces of South Viet Nam. But battalion battles and artillery duels, the relief of besieged camps, and mobile strike forces became part of the mosaic that saw this curiously named unit forge a distinct chapter in Australia's military history. The Men Who Persevered is the story of their war.

The AATTV was in Viet Nam from July 1962 to December 1972. Nearly 1000 Australians and 11 New Zealanders served with The Team' groups across a wide spectrum of military posts throughout the South. The Team's history is revealed through the words of the men involved as their cables and reports discuss how Australia should be involved militarily. The Men who Persevered also lays bare the frantic pace of battles in I Corps and the Central Highlands and tells a story of compassion as medics and other men made valiant efforts to help the people help themselves. And in the end, it is a tale of bitterness and betrayal as the West abandoned their ally and withdrew with almost obscene haste to the comforts of home.

Many of the memories recounted here have not been told before, but age has not dimmed the memory of the ferocity of the battles or reduced the men's admiration for their comrades and their unit.

The Men Who Persevered includes an accurate and unique nominal roll of those who served where and when with The Team.

'The battle-scarred and bloody activities of the iconic but lonely Australian Army Training Team in Viet Nam are penetratingly described in this superbly researched account. If you are in any way interested in Australia's total involvement in Viet Nam you should possess this book.' Brigadier John Essex-Clark, DSM, (Ret.)

'I was most impressed by the background research, which adds considerably to the confused and ill-conceived participation in the first place. The story reads very well indeed and should certainly appeal to ex-AATTV members, to the interested general public and most importantly provide an authoritative history for the future. Congratulations on a mammoth effort to produce a professional and much- needed publication.' Colonel Alex Preece, DSO, MVO (Ret.) CO AATTV, 1965
More books by this author

Bruce Davies saw operational service in South Viet Nam in a part of every year between 1965 and 1970. He served with an Australian infantry battalion and then twice with the AATTV as an adviser with ARVN units and the 'Mike force' in Pleiku. He was Mentioned-in-Despatches in 1970 and received a Commendation for Distinguished Service in Viet Nam in the End of War List. Bruce also has several foreign awards for service in Viet Nam. This is his first book.

Gary McKay retired from the Army as a lieutenant colonel after 30 years service, and is now a full time non-fiction writer. He was an infantry platoon commander in Viet Nam where he was awarded the Military Cross. This is his ninth book on the Australian involvement in the Viet Nam War.

7 The Beginning of the End 1968 The Tet Offensive

1 Nominal Roll of Those Who Served

3 Chronology of the War