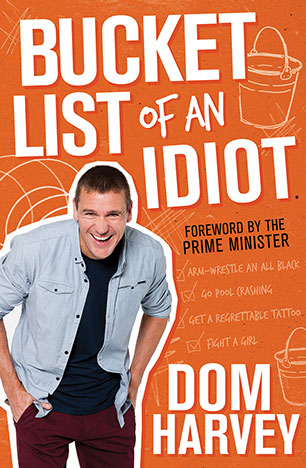 Brave or crazy? Dom Harvey proves that he's both by letting his friends and family set him a bucket list of mad tasks.

Hello, my name is Dominic Harvey and I am an idiot.

Ever since the movie The Bucket List came out in 2008, people have been creating their own lists of things to do before they kick the bucket. Some of the things on these lists look so difficult that I wonder if dying would be a better option than actually ticking off the items. The purpose of these lists seems to be to make the list maker feel like they are doing something more with their life than sitting around writing lists and watching Morgan Freeman DVDs.

I am a paid-up life-member of a place called the comfort zone. People always go on about the importance of getting out of your comfort zone. Not me. Any day I can stay inside it is a good day. All of which makes it a bit odd that I decided to complete a bucket list of my own. Not just any bucket list though. This is a reverse bucket list - a bunch of stuff that I could have happily passed away without ever doing - stuff like getting a tattoo I'd instantly regret, arm wrestling an All Black and being the model for a life drawing class - and I recruited some of my closest family and friends to compile it for me. In hindsight, this was a bad idea. But here it is - my pain, discomfort and humiliation for your pleasure - The Bucket List of an Idiot.
More books by this author

Dom Harvey is one-third of one of New Zealand's favourite radio breakfast crews, The Morning Madhouse on The Edge. One of the other thirds is his wife, Jay Jay Feeney, who is - coincidentally the 12th most trusted person in New Zealand according to a recent survey. Dom didn't make the list. Not even. He's originally from Palmerston North but don't hold that against him.