Funny You Should Ask Again... 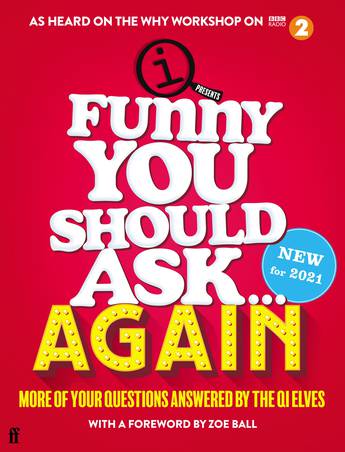 The perfect Christmas gift for the incurably curious. With an introduction from Zoe Ball.

Every Wednesday on The Zoe Ball Breakfast Show, BBC Radio 2's most inquisitive listeners get to put their questions to the QI Elves. The questions are wonderfully original, often silly and sometimes quirky, and the QI Elves' answers are always fascinating and frequently hilarious.

From spiders to stinging nettles, bees to by bands and twins to thermal undies, you'll wonder why these questions never occurred to you before - but you'll never forget the answers and will want to share them will all your friends.


Funny You Should Ask Again . . . is a must-read for the incurably curious.
More books by this author

The QI Elves are the team of writers and researchers behind BBC Two's smash-hit panel show QI. They have authored the 10,000 Facts series of QI books across seven titles, reached the semi-finals of the BBC quiz show Only Connect and had over 250 million listens on their podcast No Such Thing as a Fish. They have appeared on 'The Why Workshop' on The Zoe Ball Breakfast Show on BBC Radio 2 for over two years. For more from the team behind QI, visit qi.com or @qikipedia.

Zoe Ball is the current and first female host of the BBC Radio 2 Breakfast Show. After presenting the much-lauded Live & Kicking on the BBC, she was also the first woman to front the BBC Radio 1 Breakfast Show. An avid film buff, Zoe interviews all the top stars for BAFTA's Red Carpet and presents Sky's exclusive coverage of the Oscars. @ZoeTheBall