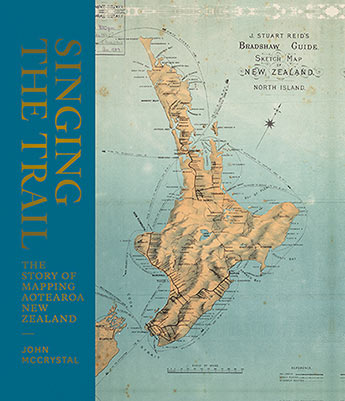 Beautifully illustrated with a selection of fascinating maps, Singing the Trail is the story of New Zealand through its maps - and the story of the explorers who made those maps.

The very first maps, oral maps made by early Polynesian and Maori settlers, were waypoints, lists of places in songs, chants, karakia and stories that showed direction.

Hundreds of years later, Abel Tasman made the first attempt at a physical map; followed more than a century later by James Cook, whose more detailed map was made as he circumnavigated Aotearoa. Once the detail of the coastline was filled in, it was the turn of the surveyors, explorers, rockhounds, gold diggers and politicians to negotiate the internal detail.

The story of these maps is also the story of Aotearoa New Zealand.
More books by this author

John McCrystal lives in Wellington with his partner, two children and a large, indefatigable dog. He has been working as a freelance writer since 1996, contributing to most of New Zealand's leading newspapers and magazines. Since publishing his first book in 1999, a biography of businessman Bob Owens, he has written, co-written or ghost-written over 50 non-fiction titles on a diverse range of subjects, including biography, social history, travel, sport and economics. He has also published a handful of short stories (some of which attracted national awards), a single radio play and (with broadcaster Graeme Hill) produced the very popular radio series, 'Shipwreck Tales'. Maps and charts have been a lifelong fascination.