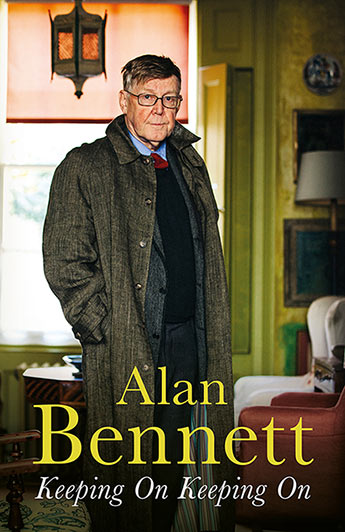 A new collection of Alan Bennett's diaries and more

'I seem to have banged on this year rather more than usual. I make no apology for that, nor am I nervous that it will it make a jot of difference. I shall still be thought to be kindly, cosy and essentially harmless. I am in the pigeon-hole marked 'no threat' and did I stab Judi Dench with a pitchfork I should still be a teddy bear.'

Alan Bennett's third collection of prose Keeping On Keeping On follows in the footsteps of the phenomenally successful Writing Home and Untold Stories, each published ten years apart. This latest collection contains Bennett's peerless diaries 2005 to 2015, reflecting on a decade that saw four premieres at the National Theatre (The Habit of Art, People, Hymn and Cocktail Sticks), a West End double-bill transfer, and the films of The History Boys and The Lady in the Van.

There's a provocative sermon on private education given before the University at King's College Chapel, Cambridge, and 'Baffled at a Bookcase' offers a passionate defence of the public library. The book includes Denmark Hill, a darkly comic radio play set in suburban south London, as well as Bennett's reflections on a quarter of a century's collaboration with Nicholas Hytner. This is an engaging, humane, sharp, funny and unforgettable record of life according to the inimitable Alan Bennett.
More books by this author

Alan Bennett has been one of our leading dramatists since the success of Beyond the Fringe in the 1960s. His television series Talking Heads has become a modern-day classic, as have many of his works for the stage.
One of the National Theatre's most successful productions ever, The History Boys won numerous awards including Evening Standard and Critics' Circle awards for Best Play, an Olivier for the Best New Play and the South Bank Award. His collection of prose Writing Home was a number one bestseller. Untold Stories won the PEN/Ackerley Prize for autobiography, 2006. Recent works of fiction are The Uncommon Reader and Smut: Two Unseemly Stories. The film of The Lady in the Van starring Maggie Smith was released in 2015, and a new edition of his book of the same name a #1 bestseller for nine weeks.