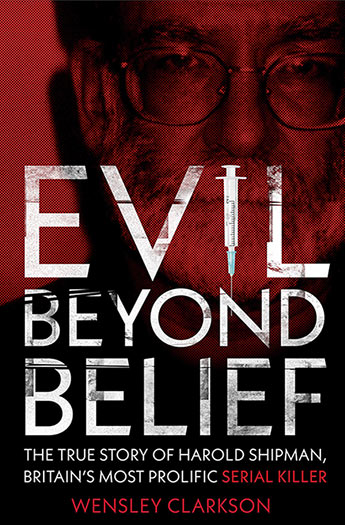 The shocking true story of Harold Shipman, the doctor who became Britain's most prolific serial killer.

This is the shocking story of a doctor who was addicted to murder: a man who wickedly abused the trust of his patients with horrifying results.

He was a pillar of the community: attentive, kind, never too busy to chat. Yet behind this charming facade lay the world's most prolific serial killer, with at least 200 victims. Small, bespectacled Dr Shipman was making house calls - and then committing murder with bloodcurdling expertise and professionalism. He saw himself as playing God.

This sensational book looks behind the man and reveals how, throughout his 25-year campaign of evil, Shipman continued to be a doting husband and father, trusted and adored by the majority of his patients. Evil Beyond Belief looks at how he was able to get away with murder for so long and - most important of all - why he was driven by a twisted, insatiable lust for death. It also looks at the events leading up to Shipman's suicide and examines the effect that this dramatic event had on the families of his numerous victims.
More books by this author

Wensley Clarkson has investigated numerous crimes across the world for the past thirty years. His research has included prison visits, surveillance operations, police raids and even post mortems.

Clarkson's books - published in more than thirty countries - have sold more than two million copies. He has made numerous documentaries in the UK, US, Australia and Spain and written TV and movie screenplays. His most recent major TV project is Florida-based drama series Boca Grande which he created, developed and wrote with BAFTA award-winning Peaky Blinders director David Caffrey. Clarkson's recent book Sexy Beasts - about the Hatton Garden raid - was nominated for a Crime Writer's Association Dagger award.