A Rift in Time

Travels with my Ottoman Uncle 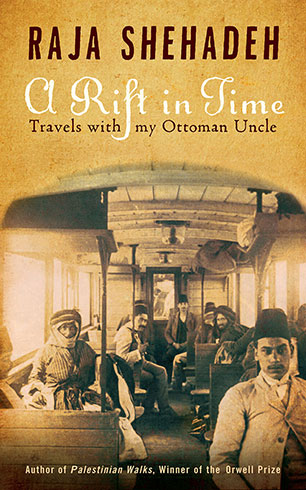 From the Orwell Prize winning author of Palestinian Walks comes the poignant and revealing true story of his remarkable great uncle's political struggles.

Raja Shehadeh is the most celebrated Palestinian writer working today. To his surprise, when researching his family history, he discovered a great uncle who had also been a writer entangled with the authorities, and who, like Raja, had dedicated his life to the freedom of the Palestinian people. Najib was a journalist and romantic living in Palestine, then part of the Ottoman Empire. When he voiced his opposition to Ottoman participation in the First World War, a death sentence was put on his head. So he fled, living on the run and off the land for nearly three years.

The quest for Najib, the details of his life, and the route of his great escape consumed Raja for two years. As he traces Najib's footsteps, he discovers that today it would be impossible to flee the cage that Palestine has become. A Rift in Time is a family memoir, but it is also a reflection on how Palestine - in particular the disputed Jordan Rift Valley - has been transformed. Most of Palestine's history and that of its people is buried deep in the ground: whole villages have disappeared and names have been erased from the map. Yet by seeing the bigger picture of the landscape and the unending struggle for freedom as Raja does, it is still possible to look towards a better future, free from Israeli or Ottoman oppression.
More books by this author

Raja Shehadeh is a Palestinian lawyer and writer and the founder of the pioneering Palestinian human rights Al-Haq. He is the author of several acclaimed books including Strangers in the House and When the Bulbul Stopped Singing and the winner of the 2007 Orwell Prize for Palestinian Walks (all Profile).