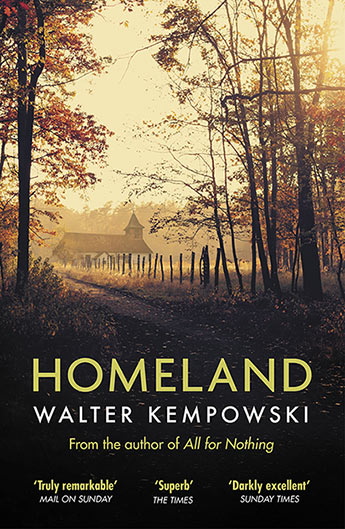 A sharply evocative novel of one man's journey into his family history and the troubled legacy of World War II, from the author of All for Nothing.

It is 1988, the year before the Berlin Wall came down. Jonathan Fabrizius, a journalist living in West Germany, is asked to travel to the contested lands of former East Prussia - where the Nazi legacy lives on in buildings and fortifications - to write about the route for a car rally. It's a plum job, but his interest is piqued by a personal connection. Here, among the refugees fleeing the advancing Russians in 1945, he was born.

Homeland is a nuanced work from one of the great modern European storytellers, in which an everyday German comes face to face with his painful family history, and devastating questions about ordinary Germans' complicity in the war.
More books by this author

Walter Kempowski (1929-2007) was one of Germany's most important post-war writers, known for his acclaimed collection of first-hand accounts of WWII, including Swansong 1945 (Granta, 2014). His critically applauded final novel, All for Nothing (Granta, 2015) was a bestseller in both Germany and the UK.

Charlotte Collins studied English Literature at Cambridge and worked as an actor and radio journalist before becoming a literary translator. In 2017 she was awarded the Goethe-Institut's Helen and Kurt Wolff Translator's Prize for her translation of Robert Seethaler's A Whole Life.