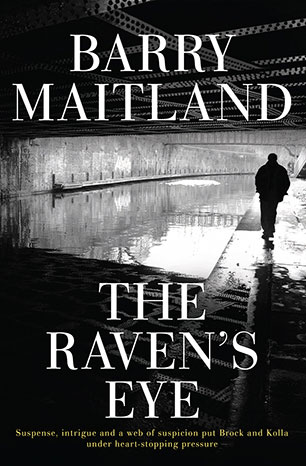 On the trail of a brutal killer with a meat cleaver and a grudge, Brock and Kolla are also watching their backs as new technologies threaten their jobs. A throat-stopping, heart-thumping mystery from one of Australia's most acclaimed crime writers.

A woman dies in her sleep in a houseboat on the Thames; the apparent cause of death, an unflued gas heater. It all seems straightforward, but DI Kathy Kolla isn't convinced. Both Kathy and DCI Brock run up against opposition in their investigation. An aggressive new Commander is squeezing out old-fashioned coppers like Brock and Kolla. To make matters worse, there's a new Task Force moving in on their patch, and a brutal killer, Butcher Jack Bragg, to be tracked down and caught. It's one of Brock and Kolla's bloodiest investigations yet.

A heart-thumping read, The Raven's Eye gives us Brock and Kolla under pressure; it's a clash between the menacing ever-present eye of computer surveillance versus the explosive threat of a man with a meat cleaver and a grudge.

'.a gripping police thriller.The writing is crisp and interesting and the characters are engaging and convincing.' Canberra Times

'This is my first Brock and Kolla novel, but it won't be my last.his great strength is his flawless plotting. It's a rollicking ride.' Good Reading
More books by this author

Barry Maitland was born in Scotland and brought up in London. After studying architecture at Cambridge, he practised and taught in the UK before moving to Australia where he was Professor of Architecture at the University of Newcastle. He has since retired from the university to pursue his writing. Maitland's first mystery The Marx Sisters was a nominee for the John Creasey award for Best First Novel and The Malcontenta won the Ned Kelly Award for Best Crime Fiction. Bright Air, Maitland's first crime novel set in Australia was published in 2008. The Raven's Eye is his twelfth Brock and Kolla mystery.