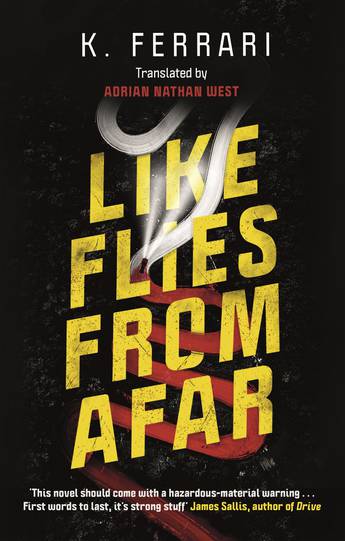 A wickedly dark, multi-award-winning noir novel in translation about corruption in the Argentine state.

Luis Machi has had enemies for a long time: after all, he's built his success on dirty deals - not to mention his cooperation with the military junta's coup years ago, or his love life, a web of infidelities. What's new is the corpse in the boot of his car. A body with its face blown off, detained by a pair of furry pink handcuffs that Machi knows well . . .

Someone is trying to set him up, but the number of suspects is incalculable. Machi is stuck dredging his guilty past for clues and trying to dispose of the mystery corpse. But time is just another enemy and it's running out fast.

Like Flies from Afar is a wickedly dark and thrilling ride through the corruption and violence of Argentina, embodied by a single degenerate man and one very complicated day.
More books by this author

K. Ferrari was born in Buenos Aires. He is the author of the novels Operation Bukowski, What Was Not (Winner of the Casa de las Americas Prize in 2009), Nadie es Inocente and Punto Ciego - in co-authorship with Juan Mattio. Like Flies from Afar is published in Argentina, Spain, Italy, France and the US.

Adrian Nathan West is the author of The Aesthetics of Degradation. He is a contributor to the Times Literary Supplement and the Literary Review; his essays, short fiction and translations have also appeared in the New York Review of Books, McSweeney's, the London Review of Books and other publications. He has translated books from German, Catalan, Spanish and French by authors such as Josef Winkler, Pere Gimferrer and Marianne Fritz. @a_nathanwest | anathanwest.com