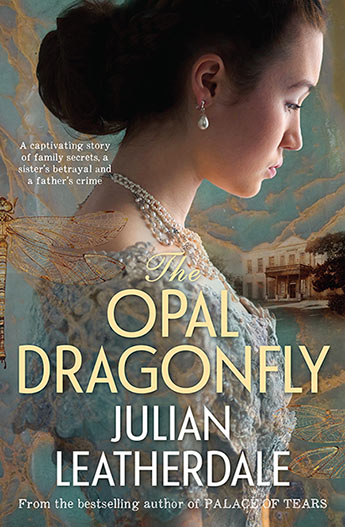 Inspired by the glamour and beauty of Elizabeth Bay House and the other grand villas of Woolloomooloo Hill in the 1850s, The Opal Dragonfly tells the story of Isobel Macleod, a young woman born into wealth and privilege and yet destined to be cast out of both.

'As you read Leatherdale's second novel, you will feel as though you're walking the streets of colonial Sydney . . . masterful storytelling, precise research, and drama that doesn't let up over the 500-plus pages.' Daily Telegraph

September, 1851. Sydney, city of secrets and gossip. When seventeen-year-old Isobel Macleod dares to trespass into a forbidden male world, she is plunged into social disgrace, and a wave of ill fortune engulfs her family.

Is Isobel to blame for her family's fate or could the cause lie further in the past with the gift of a 'cursed' opal heirloom?

Isobel's hopes for her future depend on a charming bohemian who encourages her hidden passion to become an artist. Will she be able to bear permanent exile from her beloved family home? Or will she be transformed into a new self, like a magnificent dragonfly emerging into the sunlight?

The Opal Dragonfly tells the bittersweet story of an ambitious family's fall from grace and a brave young woman's struggle to find her true self.

'This musical lyricist is carving himself a niche with sumptuous historical fiction.' Australian Women's Weekly

Julian Leatherdale's first love was theatre. On graduation, he wrote lyrics for four comedy cabarets and a two-act musical. In 2017 he wrote the short play A Life in Ten Meals for the theatre project Breaking Bread, and in 2018 the black comedy The Man Who Became Santa. He discovered a passion for popular history as a staff writer, researcher and photo editor for Time-Life's Australians At War series. He later researched and co-wrote two Film Australia-ABC documentaries, Return to Sandakan and The Forgotten Force, and was an image researcher at the State Library of New South Wales. He was the public relations manager for a hotel school in the Blue Mountains where he lives with his family. His first novel, Palace of Tears, was published by Allen & Unwin in 2015 and HarperCollins Germany in 2016. His essay on the Hydro Majestic and Mark Foy was published on the Dictionary of Sydney website for the 2015 Blue Mountains Icons project. His second novel, The Opal Dragonfly, was published in 2018. His debut YA novel, The Phantasmic Detective Agency, will be published by Eagle Books in 2020. Death in the Ladies' Goddess Club is his third adult novel.