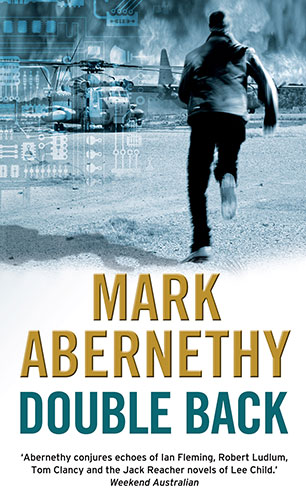 Intelligence agent Alan 'Mac' McQueen returns in a action-packed and gripping new thriller. This time he's putting his life on the line to fight the forces who will stop at nothing to destroy the independence movement in East Timor.

Intelligence agent Alan 'Mac' McQueen - the intrepid hero of Golden Serpent and Second Strike - is back!

Double Back sees Mac fighting dangerous forces that will stop at nothing to sabotage East Timorese independence. Fighting the good fight, Mac discovers a plot to use a deadly ethno-bomb which kills only native East Timorese - who don't share the ethnicity of most Indonesians . Can Mac find and destroy the ethno-bomb before it's too late? With Double Back Mark Abernethy confirms his status as a master thriller writer.

'Golden Serpent is the most accomplished spy-thriller we've seen locally, a discerning read, full of action and a kind of knowing wit.' - The Australian

'Abernethy has once again hit the market. Gripping.'- Herald Sun

'A rip-roaring tale of espionage, terrorism and counter-intelligence.' - Sunday Tasmanian

'Fast paced and action-packed.' - The Age
More books by this author More books in this series

Mark Abernethy makes his living as a speechwriter, journalist, ghost-writer and author. A former editor at Australian Penthouse magazine, he is a freelance writer for magazines and newspapers, including The Australian Financial Review.