Rose by any other name 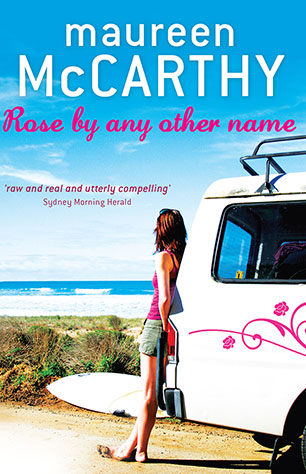 Rose wants to be alone but instead she's on a road trip of discovery with her mother. This is a warm, generous novel big on family dynamics and a rich portrait of a feisty young girl facing up to love, loss and life's big issues.

'Don'tcha just hate the way you get caught up in stuff without really wanting to? You make a wrong move, and before you know it you're in some weird scene that isn't you but . how do you get out of it? Maybe you lied, maybe you stole, maybe you betrayed your closest friend. It happens. Yeah. Then it goes a bit further, and suddenly you're one of those jerks you hate because . you can't be trusted.'

Rose is all packed up. She's got a van full of petrol and a stack of CDs. She's got a surfboard in the back and a secret that won't go away. But that's okay. She also has enough attitude to light up the night sky. Then her mother decides to come along . and Rose's road trip takes an unplanned U-turn, straight to the heart of last summer.
More books by this author

Maureen McCarthy is the ninth of ten children and grew up on a farm near Yea in Victoria. After working for a while as an art teacher, Maureen became a full-time writer. Her novels have been shortlisted for numerous awards and include the In Between series, which was adapted from scripts Maureen co-wrote with Shane Brennan for SBS TV; Ganglands ; Cross My Heart ; Chain of Hearts ; Flash Jack ; and When You Wake and Find Me Gone . Her bestselling and much-loved book Queen Kat, Carmel and St Jude get a life was made into a highly successful four-part mini-series for ABC TV. Maureen has three sons and lives in Melbourne.