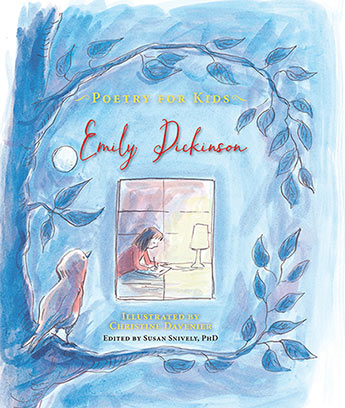 Emily Dickinson introduces a young audience to the poetry of Emily Dickinson, with helpful explanatory text and fabulous illustrations.

Emily Dickinson introduces children to the works of poet Emily Dickinson. Poet, professor, and scholar Susan Snively has carefully chosen 38 poems of interest to children and their families. Each poem is beautifully illustrated by Christine Davenier and thoroughly explained by an expert. The gentle introduction, which is divided into sections by season of the year, includes commentary, definitions of important words, and a foreword.
More books by this author More books in this series

Susan Snively, PhD, is the author of four books of poetry: From This Distance (Alice James, 1981), Voices in the House (Alabama Poetry Series, 1988), The Undertow (University of Central Florida, 1998), and Skeptic Traveler (David Robert Books, 2005). She has taught at Smith College, Mount Holyoke College, and Amherst College and has received fellowships from the NEA and the Massachusetts Artists Foundation. For 27 years, she directed the Writing Center at Amherst College and is the Associate Dean of Students. She earned her BA from Smith College and her MA and PhD from Boston University.

Dr. Snively has given readings and lectures at the Salem Athenaeum, Marlboro College, University of Louisville, Wesleyan University, the Bread Loaf Writers Conference, the Monadnock Lyceum Lecture series in Peterborough, NH, and elsewhere. A guide at the Emily Dickinson Museum, Snively wrote and narrated the films Seeing New Englandly, and My Business is to Sing, produced by Ernest Urvater, in the series Angles of a Landscape. She regularly leads discussions on various aspects of Dickinson for the museum's monthly poetry group. Her first novel, The Heart Has Many Doors, about Dickinson's love affair with Judge Otis Phillips Lord, was published in February 2015, by White River Press.

Christine Davenier worked as a teacher for three years before illustrating her first book in France in 1988. Since 1999, Christine has also been illustrating books in the United States. Her energetic style and exuberant characters have helped her books garner Parents' Choice and Booksense Top Ten awards. In 2002, The First Thing My Mama Told Me (North-South) was chosen as a New York Times Best Illustrated Book. More recently, books in the Very Fairy Princess series (Little, Brown), written by Julie Andrews and Emma Walton Hamilton, have spent several weeks on the New York Times and Publishers Weekly children's bestseller lists.