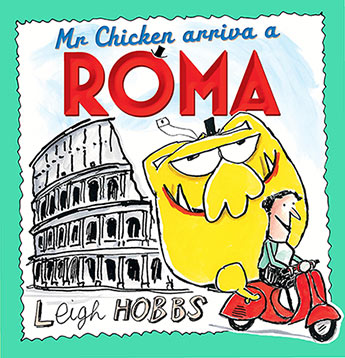 Mr Chicken has been to Paris and London, but his taste for travel is insatiable - now it's time to visit Rome, a city of ancient wonders and delicious things to eat. From the hilarious mind of the 2016-2017 Australian Children's Laureate.

'Climb aboard my Vespa and hold on to your hat.'

Mr Chicken's childhood dream is about to begin...

Another triumph from the Australian Children's Laureate, acclaimed creator of Mr Chicken Goes to Paris and Mr Chicken Lands on London.
More books by this author More books in this series

Leigh Hobbs is the bestselling author of more than 20 books, including the iconic Old Tom, Mr Chicken goes to Paris and Horrible Harriet. As an artist, he works across a range of mediums, as well as writing and illustrating his children's books.

Mr Chicken goes to Paris was shortlisted for the 2010 Prime Minister's Literary awards and has been a constant best seller at the Louvre Museum Bookshop in Paris. Old Tom has been adapted into an extremely popular TV series.

Leigh Hobbs was the Australian Children's Laureate for 2016-17. His subversive humour has delighted children for more than two decades.

You can read more about Leigh at www.leighhobbs.com