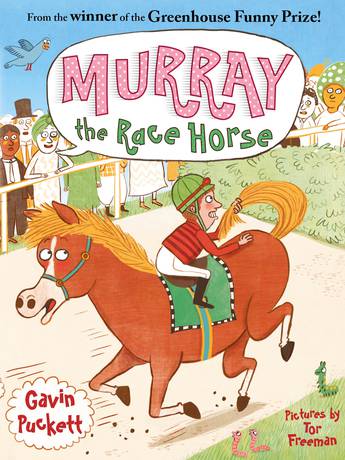 Hilarious new edition of an underdog story (about a horse) from Greenhouse Funny Prize winner Gavin Puckett and illustrator Tor Freeman, for ages 7+.

Murray the horse dreams of winning big races just like the rest of his family but he has one problem - he's just not that fast! When horse Ned Plumb twists his ankle at the start line, his jockey spots Murray in the crowd and says, 'Fancy a race?' Murray finally gets his chance to shine and beat the neigh-sayers with a rather unusual race technique...

Written in winning verse, the accessible, bonkers writing in Murray the Horse will charm boys and girls age 7-11 (and horse-lovers of all ages), is complemented by Tor Freeman's hilarious illustrations, and has a great message about believing in yourself and following your dreams.
More books by this author More books in this series

Gavin lives in South Wales with his wife, his young son and their cat, George. He spends his days working as a school liaison officer with the police and won the Greenhouse Funny Prize in 2013 with his debut book, Murray the Horse. Tor Freeman is a Londoner and a freelance illustrator since she graduated from Kingston University with a BA in Illustration in 1999. In 2012 she was awarded a Sendak Fellowship.